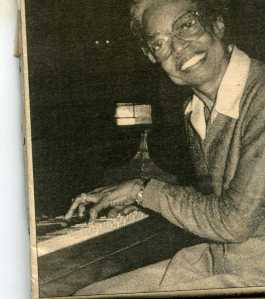 Florence was born on August 19th.1917 she attended Nellie Crawford’s’ School and later Berkeley Institute. She worked and managed the Sunshine Laundry. She became head cashier at the Bermudiana Hotel. She also worked for the wholesaler Atlantic Commission Agency. She held several positions as receptionist switchboard operator at Winter-Cookson Petty Ltd.
Mrs. Bell was an avid church goer she attended the Anglican Cathedral and sang with their choir. A member of the Mother’s Union, the Guild of good Shepherd.
Flo was a lover of music and started early music lessons at the age of three years. She went out into the entertainment circuit at the age of 16 years where she started playing with bands such as Pop Gilbert, Ernie Leader and the Aldano Quintet. She was classed as one of Bermuda’s top musicians.
Like many people during that era she did lots of funding raising and would bring comfort with her music at the hospital and various nursing homes.
Young people will only learn of musicians like Florence ‘Flo” Bell who was among those who broke the barriers in many areas in the music field if history continues to write about them as some of the best entertainers in the Bermuda Island. This should makes us ‘Proud to be Bermudian. Florence passed on to her great reward to play in the heavenly choirs on September 15th. 2001