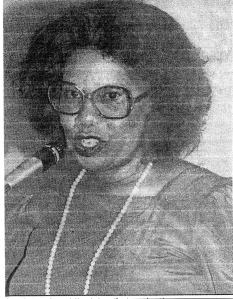 Mrs. Oda Mallory well known for the Radio show’ Living Memories’ left us with a host of historical stories that will hopefully one day see the light of day. She was the daughter of Frederick Ratteray and Grace Brown Ratteray. She attended West End School the Central School and Sandy’s Secondary School. She studied receptionist and Secretarial skills under Ruth Seaton James and later went on to Skinner Secretarial School and Bermuda College. Her first radio experience was as a Taxi dispatcher she learnt typing and shorthand and took an accounting course in 1965.

She was known to her radio audience as ‘Blondell’ and the show aired from 1980- late 1990. her stories covered many senior citizens of Bermuda and one of her more noted was the story of Tucker’s Town when a Black Community was evicted to make way for high end tourism establishments. In the discovery it brought to light overgrown foliage covering several slave graves at Tucker’s Town. Later in that same time a group consisting of several interested Bermudians made contact with the Marsden Methodist Church  under Rev. Joseph Whalen who appeared to be the gate keepers  for the grave yard for permission to clean up the area and seek to see if there were more graves on the outside of the area of the present walls that was erected there that permission was denied. Eventually it was cleaned and proper walls erected the committee held one or two events there as tourist attractions and then no more had been done regarding the location. However the people of Bermuda will be forever grateful to Oda for her bringing this subject to light. She operated her own store in the City of Hamilton where she sold rear stamps and coins, known as the City Coins and Stamp Gallery for 11 years.  She acquired a knowledge of Numismatics the study of currency and philately for postage stamps. She received such note from establishments of major international auction houses  as Spink and Sons of London and Lloyd’s of London who would call for her expertise on Bermuda Coins and Stamps. Oda like Dr. Eva Hugdson and many up and coming Bermudians’ faced racism in her line of work but she was encouraged to continue to build her skills. She was invited to be guest speaker for the Bermudian Heritage Museum at their recognition night. She married Ralph Mallory Sr. a prominent footballer who himself became notable in his own right being included among the Bermuda select team in his day  to travel overseas.  He played with such notable players as Calvin(Cal) White Sr. Dilton (Dick) White Sr. and Earl ‘Townsey’ Russell playing for top football clubs. Mrs. Oda Mallory was awarded the Queen’s Certificate and Badge of Honour in 1985 for her services to her community. Well done Oda many will continue to remember your name.