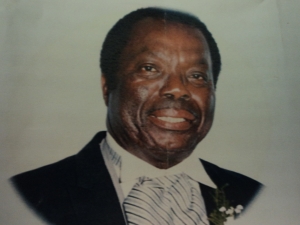 James A Edwards was the eldest child of Charles A. Edwards and Millicent L. Edwards. They resided in the family homestead on Glebe Road in Pembroke. He attended the Band room  school in North Village once known as Mr. Robinson’s School he then went on to Central School. He was an entrepreneurial person  and this led him to a vast working career. He worked as a Prison Officer, Police Officer, a taxi owner/ Operator, Security guard and a horse groomer. He found his way into several fields. During the years of the horse and buggy days he worked with Cecil Frith Funeral Home. He drove the horse-drawn funeral hearse for Bermuda’s Funeral Directors, such as Perinchief and Bulley-Graham. His handling of horses was one of his greatest passions and he showed his expertise as he drove for many an event such as Funerals and Weddings. This afforded him to be selected to drive for several Governors of Bermuda to all official duties Parades, church and memorial services. He would become a well know owner and operator of a taxi which became the major transportation of many entertainers that performed at the Forty Thieves Club one of the most popular night clubs in Bermuda where he also served as a security  guard during his spare time. He drove such entertainers as Aretha Franklin, Nancy Wilson, The Platters to name a few. He operated the Diamond Catering Service  which was a lunch wagon at many locations about the Island. He attended St. Paul A.M.E. church and served as one of its senior ushers for many years. He surely left a legacy for his children to follow.

Ivan Sinclair ‘Skipper’ Dill was born as the third child of Mary Elizabeth Dill and James Stewart Page. He had one brother  Hilgrove ‘Peter’Dill and three sister Ruth, Myrtle and Winifred. They were the products of a mother of Portuguese descent and a father of Peruvian Indian Descent. Ivan grew up on St. Monica’s road Pembroke. He attended primary school in the neighbourhood. He started work in his early teens. He loved boats and to that end he joined the Royal Navy  as a young man. He sailed to many places around the world and enjoyed telling his sea-faring stories to any one who would listen. He was a member of the War Veteran’s Association and participated in several of their memorial day parades. He loved animals and worked with Dr. Steele a local veterinarian as his assistant. He traveled with Dr. Steele to many other countries during this period. He moved on to work with a department of government for a few years. Skipper was a lover off the water and an avid fisherman. He had the gift to navigate after dark just by looking at one of the lighthouses and finding his way home. He was passionate about fishing and was an excellent net-maker an art he more than likely learnt from his Uncle Antonio ‘Tony’  Minks. He owned several boats and one only needed to search the shore of North Village to seek him out. He attended Grace Methodist Church in Pembroke and became a’ willing worker’ of the church. He was always smartly dressed. He volunteered some of his time at the Bermudian Heritage Museum with two of his cousins Thelma and Inez and enjoyed the idea of learning about the history of the exhibits. As Ivan  aged his favorite hang out was near Hamilton Market place with one of his favorite cousins Grace Martin there he always made sure to pick up his favorite items for his Sunday meal bone-in cod-fish potatoes turned corn meal and okra. this was and is still today a Sunday meal for many Bermudians. He spent his reclining days at the Pembroke home with caring family and did his small bit of gardening and caring for some of his favorite animals. Ivan was a man who gave of his heart his knowledge and surely shared the lineage of his family. Well done your work did not go un-noticed. 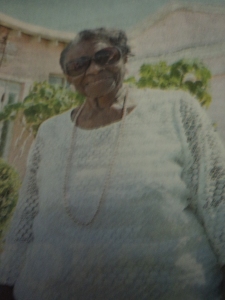 Age is no barrier

Myrtle Burrows was raised on Glebe Road North Shore Pembroke  her parents where Gilbert and Mabel Dill . Gilbert was a dockworker and along with his wife raised a large family. Myrtle was the eldest girl and as in most families of that era helped her mother to take care of her siblings. She had the opportunity to learn how to swim of the North Shore after all she should have made an effort living in an Island surrounded by water  but she never did.  She attended Central School and then learnt dressmaking at the Girls Institute of Arts and Craft under Ms. May Francis. She used that craft to her advantage throughout her life. Myrtle would design and draft many of her own patterns for her outfits and made many a wedding gown for other folk. She loved to dance and travel. Her first job was at 16 in a dry goods store in Hamilton. In later years she worked for A.S. Coopers for 12 years and then Sullivan’s Jewellers on Front Street. She enjoyed reading and one of her favorite authors is Daniel Steele. Her favorite flower is the rose. As a senior age 98  she drives many of her friends to special senior functions. She is a member of the Mount Zion Seniors Club and Special Peoples club. She has lots of musical talent in her family her brother Cecil Dill (see story in blog) and two nephews Kenneth ‘Tokey’Dill and Barrett Dill both Former Music Majors and former leaders of the Bermuda Regiment Band and brother Maxwell Dill . Myrtle said age is just a number and she would not let it keep her down. Well done Myrtle. 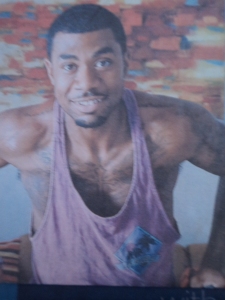 Very often we look at our young adults as a lost cause to us in many ways. The story of young Shachkeil Burrows in my view is an exception . Shachkeil had a dream which he hoped someday to see become a reality.  He wanted to become a football player and move on to coach the big time games. Born into a family of sports personalities  little does he know that lots of his relatives on his fathers’ side of his family were some of Bermuda’s top football players in this aggressive sport. It appears to take lots of skill training and determination to succeed. It would certainly take lots of time to reach the end game of his desired career to become a professional coach. I’m sure he must have received some mentoring from his father Meshach Wade who made the grade in his own right. So it is true apples don’t fall to far from the tree. In July of year 2017 while home on vacation Shachkeil was in a serious cycle accident as a pillon passenger in so doing his right leg was amputated. For a young man this must have been  without a doubt  most shocking and devastating  to say the least. This had to be a matter of saving his life. At 24 years of age he made up his mind that he was not going to give up on his dream and some how he was going to fight on. He along with a friend found a way to raise funds to achieve his objective. He managed to raise enough funds to get a bi-tech bionic leg designed for sports. Fortunately Shachkeil’s  dilemma did not go un-noticed . He was encouraged by Mr. R. Gibbons who himself had faced a similar dilemma.  Mr. Houghton who plays for a top team in Great Britain amputee team approached him through social media and gave him information that if he was able to get the technical leg he might very well be able to play for  the team in England. Humbly  Mr. Burrows was lucky to be alive and to God should go all the thanks and glory. Many don’t get a second chance. Shachkeil made up his mind he was going to grasp every opportunity he could on the road to achieve his desired career. Keep your positive attitude  young man hopefully you can become  an example to so many others. Good Luck and may you realize your dream and goals someday soon.

Raymond Augustus was born into a family of visionaries , sports personalities and community workers. He was raised in the Frizwell’s Hill area of Pembroke Bermuda and very early in life became involved in the community. He was involved with the Devonshire Recreation Club and had a passion for gardening at his home on Frizwells’Lane. Raymond was definitely a lover of our cultural heritage and the Gombeys were top on his list and why not he was surrounded by various troops in his area. In his early adult hood Raymond worked as a waiter at the Hamilton Princess Hotel for several years like a family tradition the family that prays together stays together his brothers Derrick, Calvin, David Jr. and Gary joined the ranks in the same hotel starting out as waiters. However Raymond was ambitious  and worked his way up to Captaincy and then moved  to the Colony Pub. On his move from hotel work he joined his father David Augustus 2nd well known as’Chippo’ and who himself was an icon in the football sports arena  in the Community. As a family they established owned and operated the Augustus Funeral Home. He was not averse  to sharing his time and talents and served as a member of Pembroke Parish Council for many years. 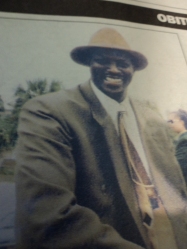 He was a fun-loving and giving person and Bermuda lost a very special   son of the soil at his passing. As the saying goes ‘gone to soon”‘.