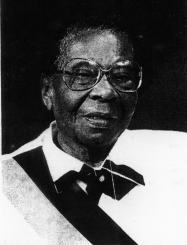 Inez Ruth Caroline Kennedy was the eldest daughter of Arthur and Ada Kennedy. She grew up on Sea Gull Lane in Spanish Point.  Both her parents were teachers and encouraged her to excel in school. Inez attended the Berkeley Institute and the Excelsior Secondary School. At age seventeen she began teaching privately and in 1938 she was appointed assistant teacher at the Temperance Hall School in Hamilton Parish. In 1941 she transferred to the West Pembroke Primary School where she remained  until 1944. She entered Teachers College at Columbia University, earning a diploma in early education. Upon returning home she accepted a post at the Francis Patton School where she taught for twenty-five years. She was famous for her Christmas plays and under her guidance students, teachers and parents participated in the productions which raised much needed funds for the school. Inez was an expert at teaching with one hand and making costumes with the other. She was known for always having extra art work displayed in her class room. She eventually rose to the position of deputy head and on occasion served as acting principal. In 1979 she received the Service award from Francis Patton School for faithful,devoted and valuable service. Inez Kennedy excelled in other areas she was a gifted tennis player. She became involved in the sport when she was a teenager and played competitively until her thirties. She captured the Somers Isle Lawn Tennis Association Ladies Singles title, the Unity Club Ladies Championship and several other trophies.  Inez believed in family and at the loss of one of her siblings she encouraged her nieces to further their education and supported them in their endeavors. They excelled  one becoming a teacher, one a nurse and the other a legal Secretary. On contemplating retirement in 1975 she was  presented with a new challenge. Inez took on the job of teacher -librarian at the Ruth Seaton James Auditorium Library. During her summer recess she continued her studies at teacher’s college Columbia University and Ontario College in Canada. There was another side to Inez’s life, that off her spiritual learning. She worshiped at the St. Paul. A.M. E church  where her love for children led her to serve as a Sunday school teacher. There she taught for over twenty years becoming District and then Conference Superintendent. In 1972 she was presented with the church’s highest lay award “The Richard Allen Award” for outstanding services in the church and community. She was also chosen as the Outstanding Christian woman of the year. She was an avid gardener , loved fishing off the rocks in her Spanish point area and  loved to travel. She explored Italy, Egypt, India the Orient and many other places. Hers was a life most loved and well lived.