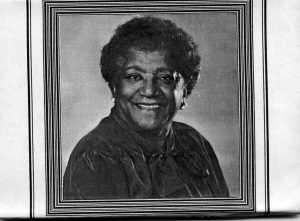 Her legacy was her love for music

Mrs. Marguerite Bassett Place was the daughter of Mr. John G. Bassett a well-known business man of his time. Marguerite was a great contributor to the community of Pembroke Parish. Much of her work revolved around the youth in the community. She was an ardent worker at St. Paul’ A. M. E. Church in Bermuda. Affectionately known as “Mama Megs” she was highly respected among her counterparts.
She was a member of the St. Paul Gospel Choir and one could often hear her soprano voice ringing out among the other choir members. She had a constant smile and was among the first persons to join the Choir which was organized by the Rev. E. N. Thornley. While serving on the Conference Board of Christian Education of the Church she became the Directress of the Allen Camp for several years.She later became a Junior Choir Director a position she held for 20 years. She was a writer and produced several skits. Her most notable work was seen in the Women’s Temperance Union.
In 1989 she was chosen as the first black president of the World Women’s Christian Temperance Union. She was proposed by the Australian delegation to run as first vice president in 1991-92 Conference. In June 1992 she was elected the fourth president of the World’s Christian Temperance Union in Sweden. She was a recipient of the Sojourner Truth Award in 1993 from the Bermuda Business and Professional Women’s Club. In June 1998 she received the M.B.E. from Her Majesty Queen Elizabeth as a member of the British Empire.
Well done Mama Megs” May your legacy always be remembered.