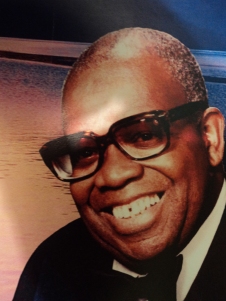 Alvin Embrose Hambone’ Brangman was born in 1923 and lived in middle town  Pembroke to Editha G. Simmons and Charles Embrose Brangman. Alvin’s early education was at Central School and Neversons’ Secondary School. At age 15 he was sent to Mr. E.C.Smith a skill carpenter who taught him in carpentry designs. Alvin had been given another gift that of music. At a very early age he could be found tinkering with the piano keys and he became a gifted pianist. His first debut was with a group known as the  ‘The four Spots ‘. He played with other local talented musicians like Winfield ‘Happy Smith, the Aldano Sextet, Freddie Matthews, Ernie Leader and his band Graham Bean and his Latinaires and Hubert Smith and his Coral Islanders. He performed in many local establishments. Alvin like most local musicians had to have a second job and he worked for the Bermuda Electric light company for 20 years before retiring. He was well-traveled and one place on his bucket was to visit South Africa and this he did and had the great pleasure of meeting Nelson Mandela. Alvin enjoy local holidays like cupmatch and Good Friday like most elders of his era he was a great kite maker and they were always colourful and specially designed. He was honored and inducted into the Bermuda music hall of fame in March of 2011 not just for his musical talent but also for his gift of writing poetry. Alvin gave his all to his community  and left no stone unturned in his musical talent and legacy to his island home Bermuda.

If ever one wanted to hear a sultry musical voice they needed to look no further than George Smith. George was born with music in his veins. He was the son of Hubert Smith a well-known talent in his own right. George loved music he not only sang with his fathers’ band the Coral islanders but he also had a group of his own known as the Xanadu. He played the maracas, Congo Drums and guitar. He was the type of singer one could lend an ear to whenever he stood on stage. He shared the stage on occasion with his close friend Eugene Steed a musical icon clearly equal to many. One of the favorite selections George sang during the Christmas season was   ‘A child is born’ he was soft-spoken and had a dashing smile. He played in many local hotels in Bermuda. He had the pleasure of performing for Princess Margaret and Prince Charles during a Royal visit to Bermuda. George was not only a classy singer but a self-employed painter and he enjoyed deep-sea fishing. He was given a Government award  for his contribution to tourism and a bravery award for saving the life of a young child from the North Shore waters. He was a J.P (Justice of the Peace). President of the Diabetes Association and a member of the Pembroke Parish Council. The voice of this angel was silenced after a long illness but the memory of his melodious music will live on.